How to Improve this Piece – Narrative Student Sample 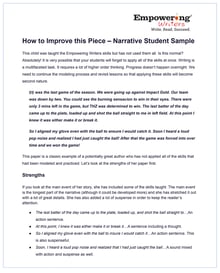 This child was taught the Empowering Writers skills but has not used them all. Is this normal? Absolutely! It is very possible that your students will forget to apply all of the skills at once. Writing is a multifaceted task. It requires a lot of higher order thinking. Progress doesn’t happen overnight. We need to continue the modeling process and revisit lessons so that applying these skills will become second nature.

"I(t) was the last game of the season. We were going up against Impact Gold. Our team was down by two. You could see the burning sensacion to win in their eyes. There were only 3 mins left in the game, but THZ was determined to win. The last batter of the day came up to the plate, loaded up and shot the ball straight to me in left field. At this point I knew it was either make it or break it.

So I aligned my glove even with the ball to ensure I would catch it. Soon I heard a loud pop noise and realized I had just caught the ball! After that the game was forced into over time and we won the game!"

This paper is a classic example of a potentially great author who has not applied all of the skills that had been modeled and practiced. Let’s look at the strengths of her paper first.

If you look at the main event of her story, she has included some of the skills taught. The main event is the longest part of the narrative (although it could be developed more) and she has stretched it out with a lot of great details. She has also added a lot of suspense in order to keep the reader’s attention.

There are a few things that this author could do to “knock” this paper out of the ball park!

I positioned myself way out in right field. Bending over, resting my palms on my knees, I could feel the sweat trickle down my back from the blazing sun.

Notice that the setting, time of day, and character is introduced in an exciting way that invites the reader into the story.

The last batter stood, slightly bent over the plate, peering out into the field with a look of stern determination on her face. Bat in hand, cocked behind her back, she was ready to unwind like a coiled up spring.

The last batter is a critical character in the story, because she actually defined the outcome of the game. The author could have elaborated on other critical elements of the story such as the ball field (critical setting) or the actual softball (critical object).

I walked off the field, standing taller than ever before. I’ll never forget the sound of the roaring crowd in the stands. I had done it. I caught the ball that sealed the victory for my team. My decision was made that day…softball would be my future.

Remember that writing is a process…not a destination. Progress will most assuredly come. Especially when young writers have the specific skills necessary for powerful revision!

"How to Improve This Narrative Piece" - Grade 3 Sample