The 2 Voices in Writing and How to Teach Them

We’ve all heard teachers talk about “voice” – how a piece of writing somehow has it or doesn’t. It is a frequently misunderstood concept, an illusive quality that often seems difficult, if not impossible to teach. In fact, some people feel that authors are either blessed with the gift of “voice” or not, or they believe that writers can only discover their voice through writing a lot. 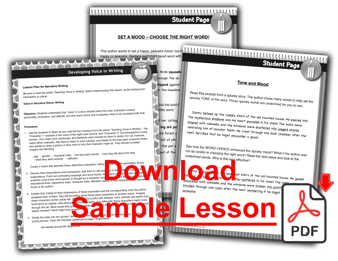 While it’s true that consistent practice in the art and craft of writing is a necessity for improvement, it is also true that an understanding and emergence of voice can be nurtured and honed through awareness, discovery and informed teaching. In other words, teachers can, without a doubt, help in the development of “voice” in their students’ writing.

Let’s begin with a definition of “voice”. Voice can be described as the unique quality, tone, or style that jumps off the page in a given piece of writing – but while voice involves tone and style, style and tone are not synonymous with voice. “Voice” in a piece of writing also takes on different meaning according to the genre and purpose.

In a piece of narrative writing (defined here as a story written about a character who encounters a problem, adventure, or significant personal experience) the voice which emerges must belong to the MAIN CHARACTER, not the author. What does this mean? Think of a number of unique, memorable, fictional characters from literature:

Each point of view character is defined; we see their view of the world, their attitudes and feelings about life, through the words they speak as well as the thoughts they ponder. Their inner and outer “voice” is consistent in pattern, word choice, rhythm and attitude. In the Junie B. Jones series, we never get a sense of author Barbara Park’s voice; in fact, her unique voice – that of a mature woman – would diminish and undermine our heroine, Junie B. Jones. Everything about each carefully chosen word resonates the:

Years ago, in a writing class presented by Newbery Award winner Patricia Reilly Giff, I had my first lesson in “voice”. Giff, in discussing her art of writing for children, stated that every sentence, phrase, word or thought from the main character must align perfectly with the age, experience, and personality of that character. Tempting as it may be to use impressive vocabulary within the author’s grasp to more easily depict meaning, believable characters are revealed when the voice the author assigns them is completely consistent with who they are – not with who the author is!

And, voice involves not only what the main character says and thinks – the “voice” of this character might better be thought of as a lens through which the reader experiences every aspect of the story.  Therefore, when the author wants to describe a story’s critical character, setting, or object, she/he must do so only in and through the life experience, strengths and weaknesses, prejudices, beliefs, and vocabulary of the main, point-of-view character.  When an author uses sophisticated segments of description inconsistent with the main character’s world view, or steps back and draws from their all-knowing author’s perspective and experience, this diminishes character and pulls the reader out of the story world.

Let’s look at an example of “voice” in a fictional setting. Think about the following scene: a character is considering taking a swim in a watering hole.

Each character is revealed through both voice and action. Neither could be confused with the other; they are each unique. The action, description, thoughts, words, and feelings depicted are consistent with the way each respective character views and responds to the world.

In expository or informative writing, there exists a relationship between the author and the reader. Therefore, the reader is exposed to and responds to, literally, the “author’s voice”.

Contrary to what many people have been taught, expository or informational writing need not be dry, dull, or boring. “Encyclopedia Voice” is a detriment to the delivery of information, as it does nothing to interest the reader – in fact it can bore them to tears.

Another fallacy is the notion that expository writing should never involve first person point of view – that the author should never personally address the reader. William Zinsser, in his marvelous book “On Writing Well: The Classic Guide to Writing Nonfiction”, discusses its use:

“What I’m always looking for as an editor is a sentence that says something like ‘I’ll never forget the day when I…’ I think, Aha! A person!

It is, therefore, impossible to have voice in a piece of exposition if the humanity, the first person perspective, is removed. Unlike in narrative writing, in expository writing we welcome the “real” voice of the author. It can be interesting, entertaining, and exciting to feel as though we know the writer, that this person is actually speaking to us.

Often times, in exposition, it is the topic that influences the style and tone of the piece.  The topic also determines the extent to which the author’s personality dominates.  For example, a piece of writing about the possible extinction of the great apes calls for a serious tone.  A lighthearted or glib tone would appear at odds with the content of the piece. Does the author need to wear a scholarly or academic hat, a casual, playful hat, a serious or cautionary hat?  Depending on the topic and purpose of the piece, the author’s voice needs to correspond consistently in word choice, tone, and style.

Another aspect of voice in expository writing mirrors our voice in the real world. We often alter our voices according to the intended audience. We might relay information to our children one way and to our spouse, a friend, our boss, the queen, another way. In writing, authors identify their target audience and consistently address this audience in the tone and style they will likely respond to best.

Let’s look at two examples of voice excerpted from a piece about kids learning to play the piano:

Clearly, in expository writing, the voice that the author projects must be appropriate to her/his purpose and audience. The voice will either invite or put off the reader, inspire confidence or doubt, empathy or disdain, and project credibility or inexperience. The word choice, sentence structure, tone, and style all contribute to the voice in the piece.

So How Do I Teach Voice?

In narrative writing, focusing on the main character (the point of view character) is critical. Encourage your students to know their characters by asking:

This kind of thinking – aligning a character’s words with thoughts, motivations, and experience requires a level of personal life experience that may be beyond the developmental capacity of younger students. It requires quite a lot of interaction and observation of others in the context of the real world. Therefore, while you can point out certain touchstones that point to the creation of voice, what it ultimately requires is time with much practice, through a keen awareness of what it is that makes people (and therefore characters) tick.

Developing the author’s voice in expository writing is somewhat easier. Students can be directed to assume the stance and expression of any number of personas relative to their topic in order to raise their awareness of “voice”.

Every word must match the tone! Try writing a piece about, for example, penguins. Write it in an academic tone, then in a humorous tone. Who might the audience be for each? These are the considerations authors of expository pieces must make relative to voice.

Whenever you read magazines, novels, journals, or newspapers, begin to do so with an ear for voice. Read with “author’s eyes” in order to continually develop an awareness of the sometimes seemingly intangible, yet consciously, intentionally crafted quality we call “voice”. What you will notice is that when “voice” is done well, we simply enjoy the writing, but when it is done thoughtlessly or inconsistently, it begins to jump out at you. Have these conversations with your students as they read and, later, as they write. Awareness is always the first step toward application.